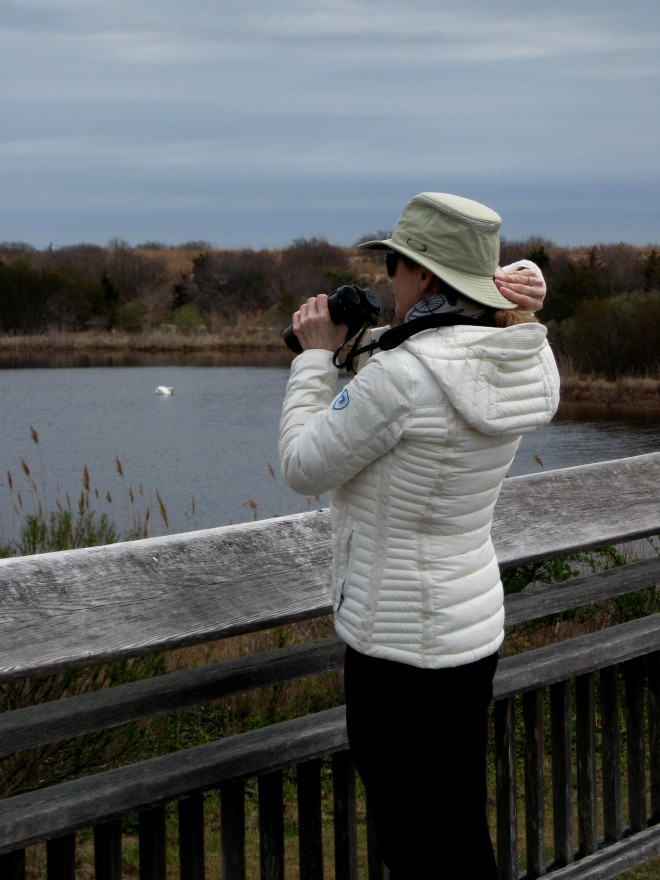 “HOLD ONTO YOUR HAT!” – Intrepid Jeanette Hooban on Easter

Over the weekend, yours truly set off for New Jersey’s two birding meccas, –Cape May and ‘The Brig’/Forsythe Wildlife Refuge.  As usual, she was running away from Holidays that used to be magical, in quest of winged rarities.  This memorable journey unfolded after Intrepid Jeanette Hooban declared [some months ago], “Carolyn, Easter is YOURS!” 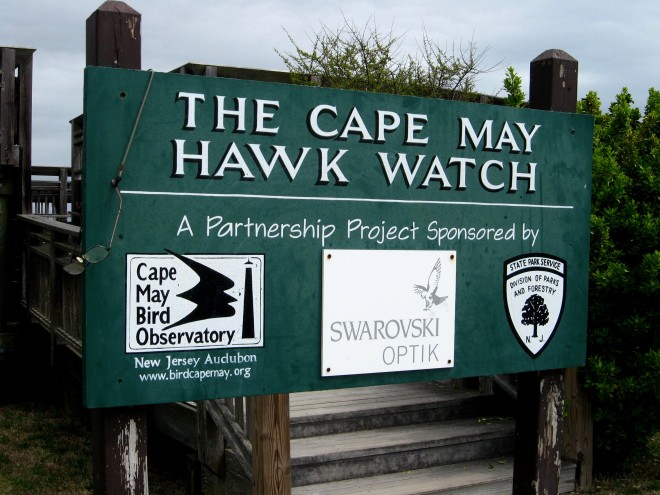 HAWK WATCH PLATFORM:  Support these courageous and generous donors, without whose work and words, people could still be slaughtering rare birds by the thousands, all along Sunset Boulevard.

The Climate Change that ‘doesn’t exist’ had other ideas.  Gale-winds had flags snapping almost to the tearing point.  Out of the SOUTH — the direction in which migrants need to be flying.  They may as well have faced a wall. 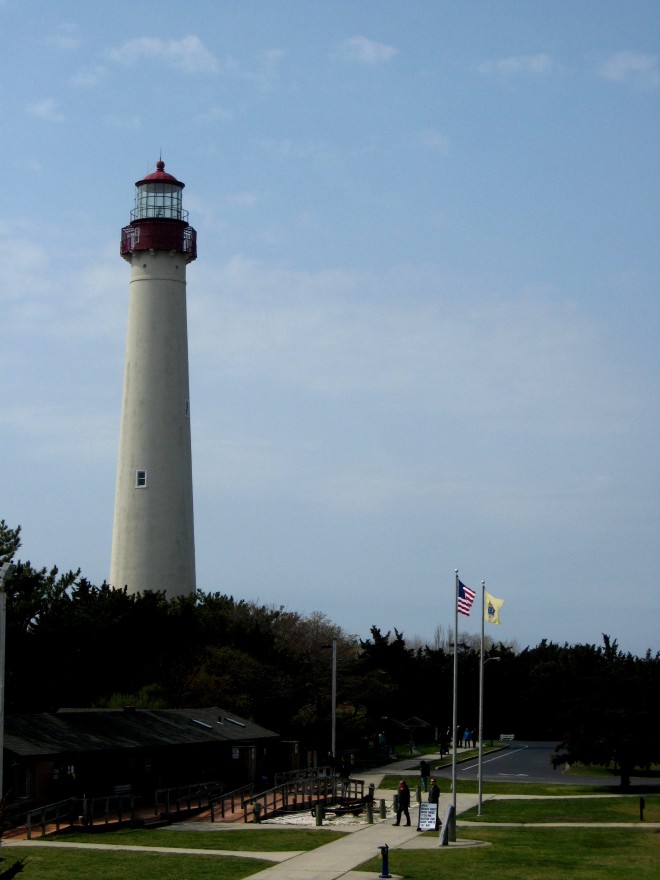 Jeanette and I learned that only swans, osprey and a smattering of gulls were strong enough either day to surmount the mistral-like onslaught. 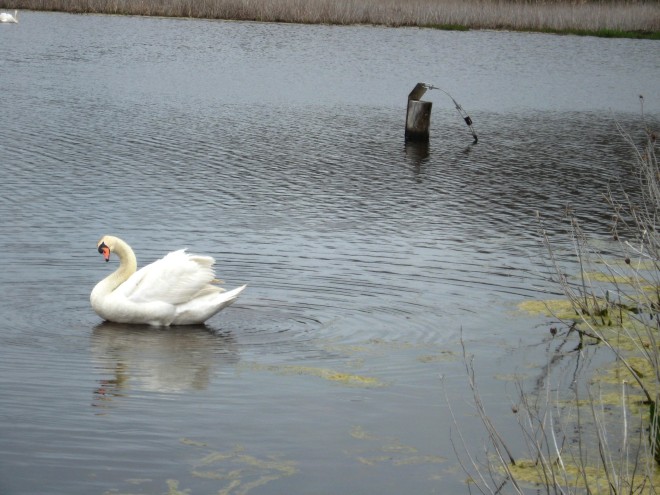 We were given three oystercatchers at the Meadows at Cape May — walking around, seeking the ideal spot for the scrape they consider a nest.  Territorialzing was inevitable and amazingly raucous.  Get that verb though, “walking.”  At the Brig, –on the side of the renovated road, opposite Atlantic City–,  a pair of oystercatchers walked around on the pale gravelly substrate, nesting on their minds.  These could have been the pair I watched feeding one young a summer ago, in that same place, where Sandy had devoured the road.

There were a few great egrets in stunning breeding plumage.  They, also, were walking.  Terns wheeled and plunged.  A yellowlegs (I can’t tell greater from lesser unless they’re side-by-side) and some willets also tried to feed in low water, –feed on foot, not on wings.

So, right now, your NJ WILDBEAUTY Cape May activity report is being replaced this time by this poem.  It was written when the Dodge Poetry Festival was still held at Waterloo Village.  Joy Harjo, a feisty, eloquent Native American, magnificently conveyed her splendid multi-level poem, “She Had Some Horses.”

“SHE SAW SOME BIRDS”

she saw some birds who

were little and magical

and sporting, at the last moment

or a brassy crown or a

gold coin on a dark

she saw some birds who

were too high on a tree-

limb or a thermal

or above slate seas

way and that –, hiding

they could have been

against the noon sun but

no one can quite

she saw some birds

dark trunks which they were

where no one can climb

or raid or even — at the very

she heard some birds

in the wide marsh

as the sun slipped

away from her and even

worse, from her birds

themselves among sere rushes

which they exactly matched

so she could not see but only

and wonder if this was her

the ones who so skillfully lose

themselves in the sedges as

she so longs to do in such 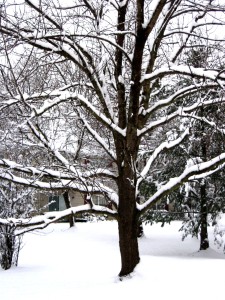 NJWILDBEAUTY readers know that I always feel, and often obey, a mandate imposed by my hero, Henry David Thoreau.: In natural situations, I resonate to the question, “What would Henry do?”  Of course, he’d journal the development of this storm.

So here goes, with no pretensions as to literary merit.

Yesterday (Tuesday, January 26th) driving home from D&R Greenway, I was puzzled to realize that — a mere two blocks from the red barn of the Pole Farm– I could NOT find that bright red barn.  An infinity of tiny whitenesses created snow fog worse than any white-out during ski trips to Zermatt.  Even more amazing, when close enough to see the barn, it HAD NO COLOR!

“Blowing and Drifting Snow”, –infamous in my Minnesota years, zwooshing across those prairies, absolutely obscuring the edges of major highways–, was alive and well and zwooshing along Cold Soil Road.  I am too aware of ditches on both sides of that narrow (seemingly unsalted, unsanded) roadway. The ditches had filled somehow.  Snow coursed, like fat white greedy hands, onto and beyond the so-called shoulder.

The snow reminded me of Royal Icing with which I had had to frost a wedding cake for a British cookbook at Tested Recipe Institute, 500 Fifth Avenue, Manhattan.  Royal Icing hardens irrevocably – and that’s exactly what the Cold Soil snow-icing seemed to have done.  With the wedding cake, [a fruit cake (!)], I had to go on and make roses.  With the Royal Icing of Cold Soil, I only had to make my halting, near-blinded way a few more blocks into Society Hill. 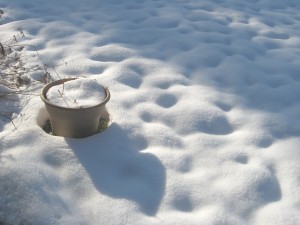 Possibly the hardest part of the homeward journey turned out to be the attempt to back into my parking place, with all stripes and of course parking place numbers, covered.  The car’s a little crooked, but, at least, with four-wheel drive, whenever I do essay a journey, I can go safely frontwards. 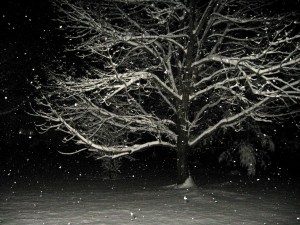 Fast forward to morning, Tuesday, January 27.  In the night, emergency orders closed New Jersey roads. Snow didn’t look that perilous at various times in the night, but it’s done a grand job of coating everything.  We never had the wild winds.  Our office was supposed to open at noon, but an early call put that to rest for this day.

This is no Nor’easter — ‘my’ snow pours ceaselessly, angling sharply from southwest to northeast, often flat-out sideways. 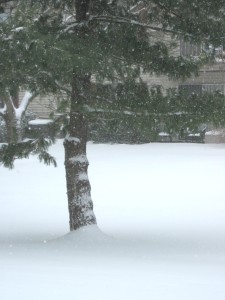 I ‘screwed my courage to the sticking place” and proceeded to brush off my car and a neighbor’s, [probably the Samaritan who had done the same for my car, last week, anonymously.]  I could STAND on the accumulated snow.  That hasn’t happened since I was ten years old!  I had forgotten how snow dampens clothes — at first it doesn’t melt and you think it doesn’t matter… 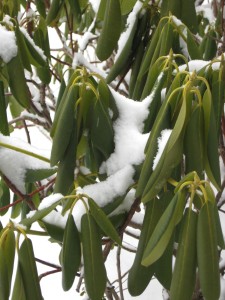 Now the promised “blowing and drifting snow” has arrived with a vengeance.  (It’s around noon.)  At first, great thick swirls, like Isadora scarves, whirled from the roof.  It seemed as though a Giant on the roof had just drunk hot soup, breathing furious gusts out onto the gelid air.  The energy and curvaceousness of the puffs brought back a Renaissance mural at Rome’s Farnese Gallery.  There, a wind god puffed fat cheeks, and white billows scurried across the wall. 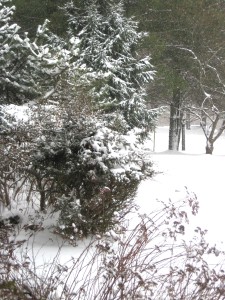 Then, out in the middle of the ‘greensward’ between my building and the one across the way, a disembodied curtain of snow zoomed across, blotting out the other buildings.  This was like the Nutcracker’s corps de ballet, impersonating not mere snowflakes, but a vertical blizzard, fast-forwarded. 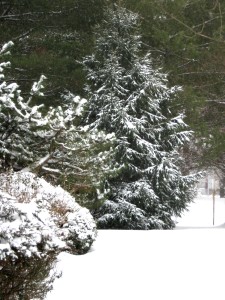 Meanwhile, snow descends with the furious relentlessness that categorizes this storm named Juno. This is an ironic name, as I am deep in Masters and Commanders by Andrew Roberts.  You could call it a quadruple biography of the decision-makers of WWII.  This spectacular British biographer/historian has great respect for FDR, affection for and pride in Churchill yet sees ‘warts and all’, and clear eyes and wisdom regarding George Marshall and Alan Brooke.  Juno was one of code names for British beaches in Normandy.  On a later D Day, I visited Juno, touched by intimate bouquets, as though hand-made, carefully placed.  Ribbons of the French tricoleur blew in the sea wind, at sites where British and American soldiers had given their lives to save France and the free world.  Ribbons of snow efface everything here at my study window. 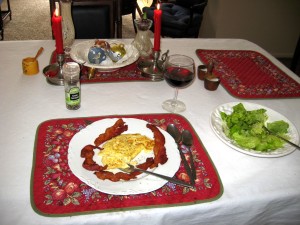 After a restorative lunch, I note the turkey vulture, tipping and soaring.  This may not be easy for him, as the ground is too cold to generate thermals which vultures require for lift.  He’s elegant, practiced, even graceful.  Pete Dunne, consummate birder, terms vultures “The Wind Masters”.  Pete taught me to appreciate them. This black and grey icon of the wild is very welcome in the totally motionless landscape out my windows. 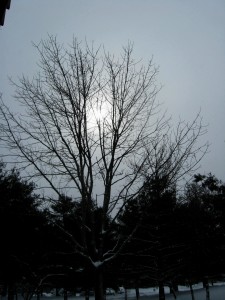 I realize, suddenly, the snow has topped falling.

There is that strange sepulchral glow to the world that comes after storm, but before sun. 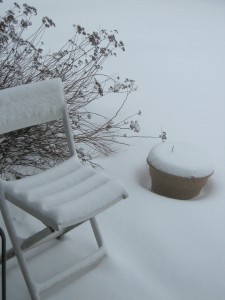 The other highlight of my day was the sudden gaggle of snow geese, heard before seen.  There is no other sound in the wild to equal their liquid mellifluous murmuring.  It is light years more wonderful than the barking of Canada geese, and thousands of times more rare.  I only encounter the snow geese chorale at ‘The Brig, in South Jersey.

These snow geese, about twenty, were nearly invisible in the impenetrable mass of minuscule flakes, if you could call them flakes. Their cluster (snow geese do not do ‘V’s’) was very determinedly flying sharply east from somewhere north.  I concluded that snow geese must have to gabble throughout their flights, whenever the element for whom they are named rules the day.  Must these black-and-white visitors from afar carry on like this, vocally, so that they do not lose each other, lose their way?

The most important New Year’s Eve of my life, when my century changed, took place at the Brig.  Hundreds, if not thousands, of snow geese blanketed Absecon Bay, the way real snow blankets everything today.  The setting sun of the 20th Century painted the bay water pink and rose and coral, and the snow geese with it.  My New Year’s Eve noisemakers were the liquidities of these birds. And now, for the first time (and I have lived in Princeton off and on since 1968), I hear that music in my back yard.

A mourning dove landed – then, the only sign of nearby life.  It looked anything but mournful, perky rather, even triumphant. 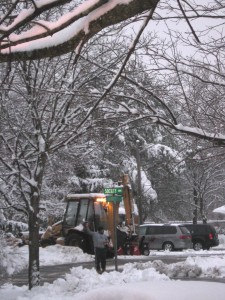 There is a sea of white on the ground, seafoam on all the clenched rhododendrons, foam and sea spray and god knows what else taking the place of sky.  All day, that sky resembled the solid fog that surrounds icebergs.  This I experienced from the deck of the SS France, which had embarked on the anniversary of the Titanic disaster, sailing that long-ago April of 1964

If Henry were here, he’d be chronicling numbers assiduously.  He would want you to know that all day the thermometer at the front door has ranged very few degrees above ten.  Late afternoon, and it has soared to eighteen. 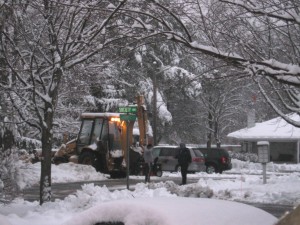 This yard is so empty of life, because Society Hill residents are forbidden to feed the birds.

The mourning dove seems taken up residence for now, puffing itself to stay warm.  There is no nourishment for it nor for turkey vulture, anywhere around here.

One friend who lives at Society Hill tells me that she and a friend have seen a coyote right in the middle of their street, very nearby.  I have yet to find coyotes here nor in the Pole Farm, but I am always searching

Another friend has gone ski-birding twice this week.  Some of her miracles include kinglets — those golden-crowned and ruby-crowned living jewels who zip about on the ground, feeding with the dapper chickadees.  And, also at the Pole Farm, she was blessed with two female Northern harriers, and the most elusive and rare male, known as “the grey ghost.”

Although the snow has seemed to stop, swirls arrive, I guess from roofs.  The last burst itself was a grey ghost. 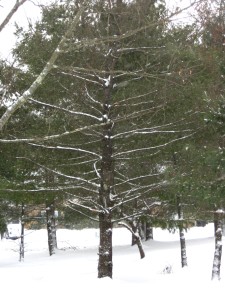 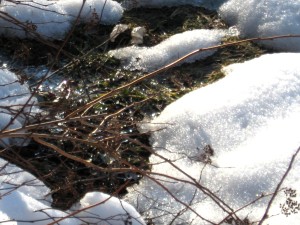 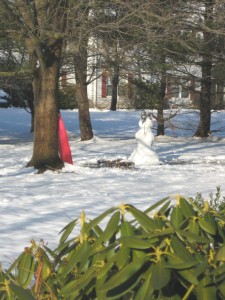