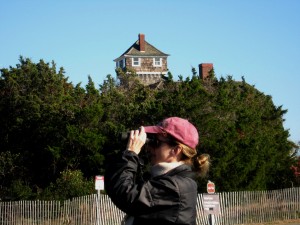 NJWILDBEAUTY readers know I recently relished the glories of Island Beach in a Nor’easter, with three friends I have come to name “The Intrepids”.  Three-quarters of us hit Sandy Hook this week, on a day when gales were predicted, though not rain.  We lunched, as ever, at Bahrs, on splendid seafood, with the barrier island otherwise known as “The Hook” shimmering like Shangri La off to our right.

The Navesink and the Shrewsbury Rivers come together at Rumson.  (I always wonder if it was named in rum-running days.)  The combined flow passes below our table at Bahrs, brushing ‘The Hook’ on its way to the Atlantic.

Where the River Meets the Sea, Sandy Hook on Horizon

Usually, birdwatching at table is pretty spectacular.  But, for some reason, the serious fishing aspect of that marina seems overwhelmed by fancier pursuits.  In France, they distinguish between “port du pesce” and “port du plaisance”.  Pesce/fish seems to have lost.  Morning’s catch was always being cleaned, just below our Bahrs windows, the remnants thrown into the air and the river, with ravenous birds making the most of it.

Even so, we had a fine time, then set out for the glories of Sandy Hook. 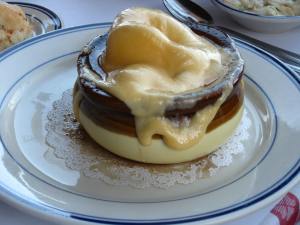 But First, Fried Oysters and Yuengling!

Sandy Hook, too, had been scoured by the ironically named Sandy.  Like Island Beach, –that other sacred New Jersey barrier island–, Sandy Hook prevailed because it is natural,  It is another sterling example of the real Jersey Strong. 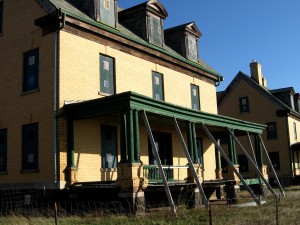 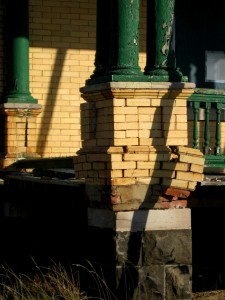 What was hurt on ‘the Hook’ was the roadway, macadam, not natural.  The military establishment.  No comment.  The storied, even haunted houses, which line the river side and are in dire condition.  Some rehabilitation has taken place, for the first time in decades.  One wonders what will come of these structures.  They are evocative, mysterious, compelling.  They seem to be undergoing a slow renaissance. 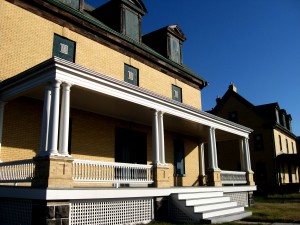 Birds have made the most of these structures.  Birds such as osprey, who used the abandoned chimneys as nest sites, decorating roofs and facades with “whitewash.”  (Use your imagination.)   All summer, we watched ospreys’ parenting, seemingly very successful.  The young were feisty and eager to test their wings, the last time I was there — test them, but not use them, not quite yet. 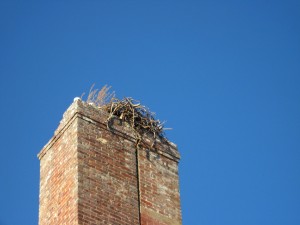 Osprey Corps of Engineers — one of many

Now all the nests are empty.  But the structures remain, bird-architecture seeming more formidable than human now at Sandy Hook.

It is a joy to see the Sandy Hook Light, the oldest continuously operating lighthouse in America, spiffy again.  Warblers were everywhere in shrubbery around this structure, and broad-winged hawks flew over on a precise schedule, as in one per minute, coasting on the wild sea winds.

Come with us.  See what “The Intrepids” discovered, on a November day as benevolent as summertime, the polar opposite of our Island Beach experience.

It was a day of black and white birds — beginning with a black and white warbler where we parked our car; rafts of dashing brant too far to see clearly when we first arrived, then spread all over a protected cove, murmuring and murmuring, on the river side.  Yes, one batch of Canada geese.  One osprey, looking very propietary, and not atall migratory.  THREE northern shrikes — life birds for Mary and Jeanette.  Those broadwings were just streaks of black, thicker than Van Gogh’s crow in that final Auvers cornfield. 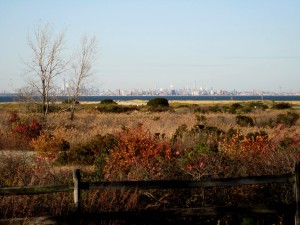 We climbed the hawk watch platform, eager for raptors.  Ironically, it was the only birdless site of the entire day.  But look at that view! 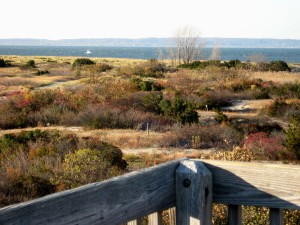 Our key black-and-white bird of the day may very well have been the first snowy owl of this season.  If so, between the platform and the sea, here, is where the snowy (ies?) hung out last year. 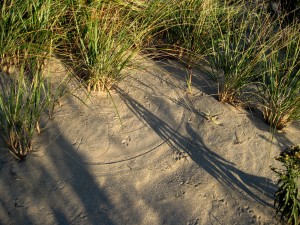 Other creatures besides the winged were out on these reaches before us.

Beauty of this magnitude does not exist in our most populous state by accident.  It happens because land was preserved.  Rejoice, each of you, and congratulate yourselves, for having voted yes for the permanent funding of open space preservation in New Jersey.  Yes, full disclosure, I am the Community Relations Associate of D&R Greenway Land Trust, –responsible for media releases; the Willing Hands, who put on all our events; Curator of the Olivia Rainbow Student Art Gallery; the poetry and art liaison throughout the year, events or no.  Nothing matters more to me than the preservation of Nature.  Nothing should matter more to YOU, either. 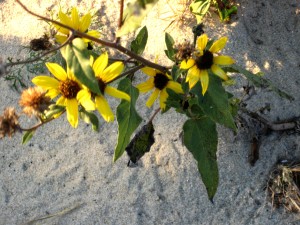 Just think, where the rabbit hopped, the fox stalked, the sunflowers erupt, could all have been a housing development or a shopping mall or an oil tanker station.  Don’t LET THEM add structures to this prime birding habitat, structures which will necessitate killing plants, trees, and therefore insects, amphibians, reptiles and mammals.  There are many ruined stretches, even here, even at Sandy Hook.  If someone has to have structures, use the ones that already exist.  Birds are paramount! 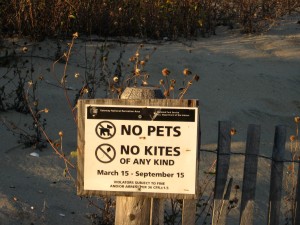 No Pets, No Kites — Protecting the Piping Plovers of Sandy Hook

“No Pets!  No Kites!”  No dogs, nor cats, nor vehicles, nor strolling humans — this is sacred Piping Plover Territory. 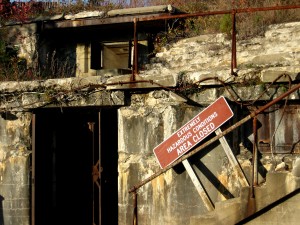 This is what happens to human structures on barrier beaches.  We need no MORE RUINATION. 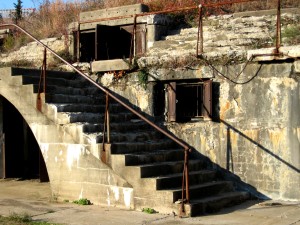 What happens to the works of man, over time, on a barrier beach.

Even Manhattan is diminished by the works of Nature.

Mary usually creates a bird list for us — and she is a pro at this, being head of Bucks County Audubon, just north of New Hope.  If she does, I’ll share it with you.

Meanwhile, bird your own neighborhoods, and any D&R Greenway preserve, especially St. Michaels Farm Preserve in Hopewell.  Take yourselves to the sea at Island Beach and Sandy Hook, and get to know Salem and Cumberland Counties on the Delaware Bayshores, where eagles are about to begin courting.

Above all, support all land trusts in your own regions — keep the green green, for the sake of the birds, for all the wild creatures.