I am lucky to have friends who are willing to go on quests with me.  NJWILDBEAUTY readers know that most of our pilgrimages have to do with nature in general and birds in particular.  Others require history.  Many involve food.  This is a jaunt with superb poet Betty Lies, friend-of-long-standing and co-founder of Princeton’s Cool Women Poets.  We needed Christmas one year, and Bordentown unexpectedly provided it, ‘in spades’   Saunter with us…  through this town of great significance, always too little appreciated in our time!

The Caboose was always my favorite part of real trains.  There was frequently a trainman in that car who waved to me, as though he’d been waiting all day for that very moment…

Trains had a great deal to do with childhood Christmas in Michigan.  One year, Santa brought me an intricate Lionel train set, even though there were only daughters in our family.  Each year after that, it circled and tooted merrily under the tree.  I had forgotten that…  regret that we did not weave that in as I raised my own daughters.

In Bordentown, it’s as though the village itself is wrapped for the Holiday.

Our Favorite Place to Eat — Old-World and Leisurely

In Bordentown, Always Look Up — The Past is Waiting 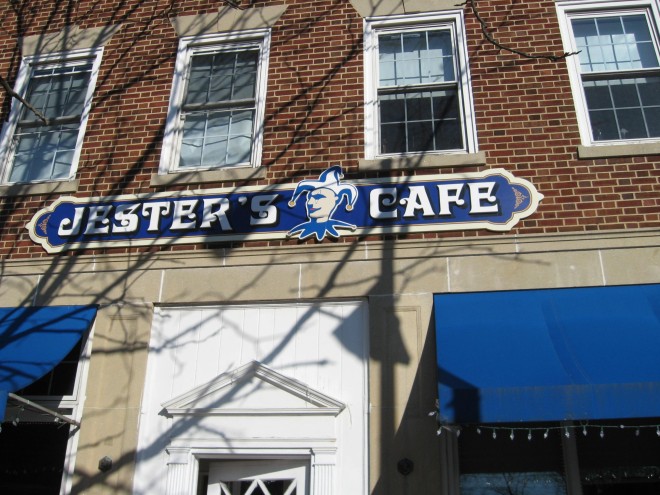 Jester’s — Home of the Hearty Welcome 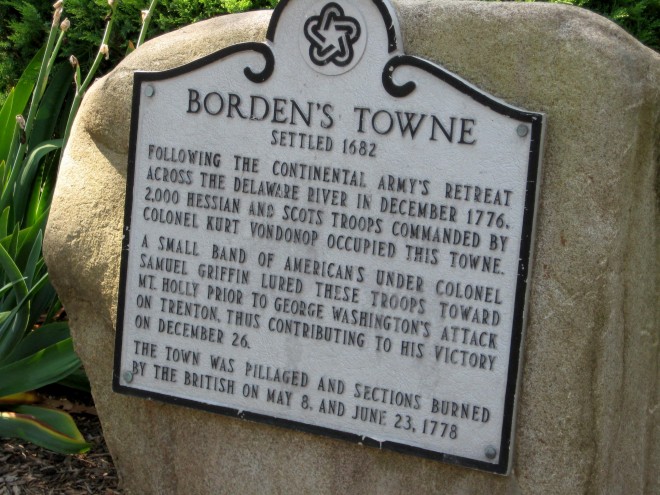 PILLAGED AND BURNED BY THE BRITISH IN 1778 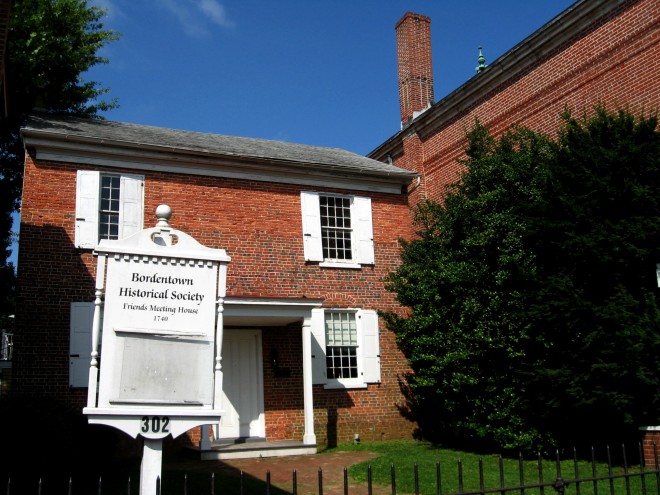 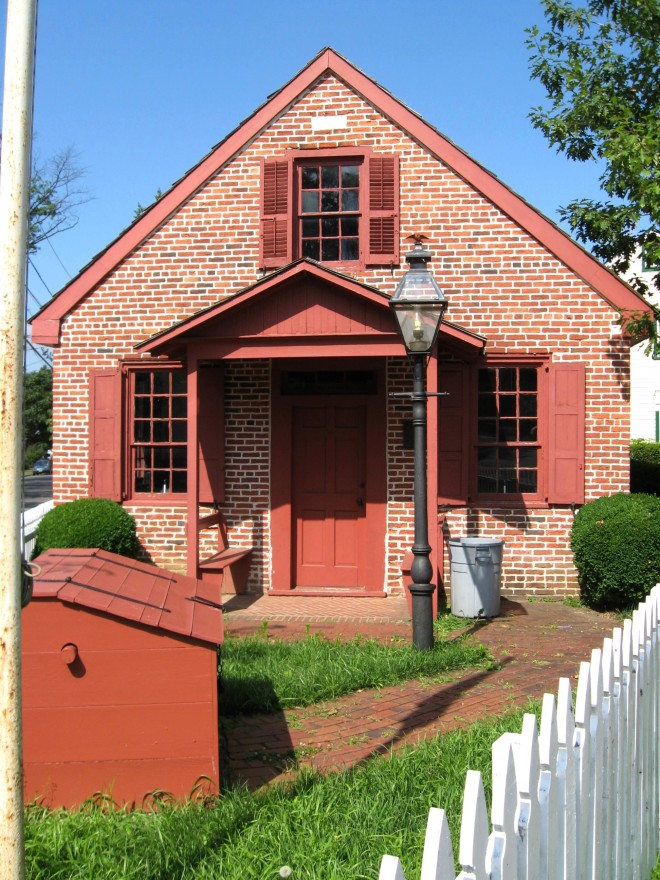 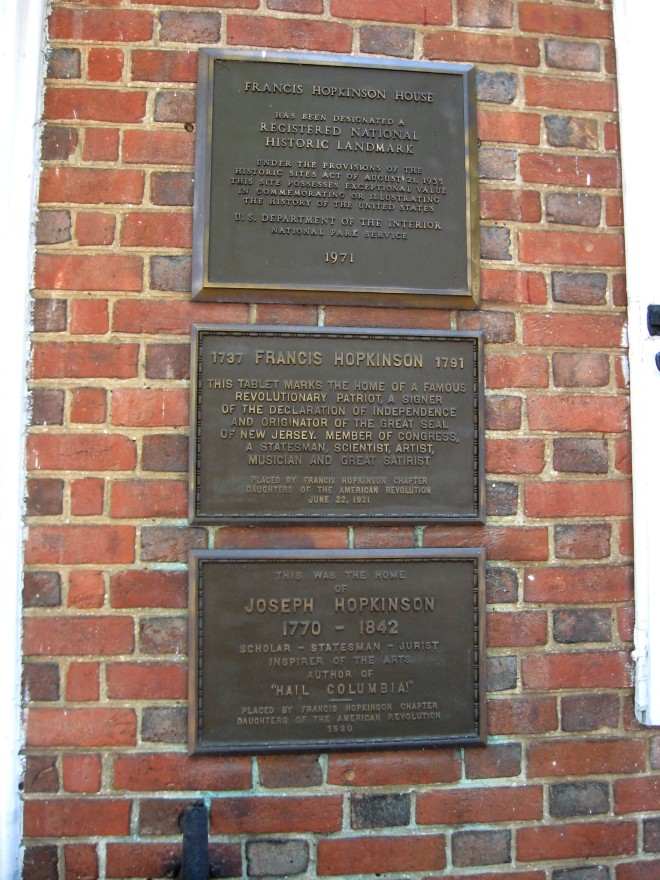 SITE OF THE RIVER LINE TRAIN – FREE BEAUTIFUL RIVERSIDE PARKING FOR ALL-DAY JAUNTS – through Marsh to Trenton or down to Roebling, Burlington, Riverton, Riverside, Camden and even Walt Whitman House and Aquarium…

And, Most Ethereal of All Bordentown’s Gifts: Mother’s Day Festival of the Most Exquisite Iris Ever Anywhere! 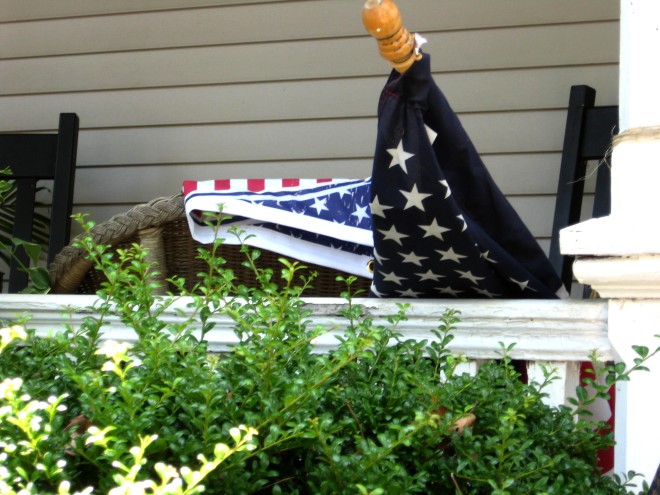 Today is le quatorze juillet, –the independence birthday of my beloved France.  I was blessed to live in Cannes on this day, 1987.  In the Bay floated ships of that country and ours.  Each morning, between 4th of July and le quatorze (14) juillet, I wakened to American anthems, then French, floating across the Mediterranean.  Those so-familiar notes drifted in, over my herb-fragrant balcony, then through the (of course) French doors.

For Fourth of July, 2017, no anthems enhanced Fourth of July in this horrifically compromised time.  In fact, I find our situation worse than under George III himself.  Nor do I hear French martial music this morning.

But I think about independence, the enormous sacrifices of all that everyone held dear, required to achieve true freedom in both countries.  I am particularly preoccupied after a recent Morven visit, by the fate of Princeton’s own Richard Stockton.  That stately mansion occupied and partially burned by the British.  He who had been chased, captured, tortured, never to recover from his  personal sacrifices to free this land from tyranny.

The more we prate of ‘liberty’ now, –to the ridiculous extent of naming an airport after this blessing/necessity–, the less we possess.

But, in bucolic riverside Riverton, New Jersey, patriotism is alive and well in nearly every dooryard.

I do not possess ‘patriotism’, as it has been vengefully re-defined since 9/11.  But time travel can restore its essence.  I seek opportunities to re-love my country  in towns along the Delaware River.  I am particularly so blessed from Lumberton and on up to Frenchtown (!) down through Roebling, Del Ran, Burlington, Riverside and Riverton on our splendid River Line train. 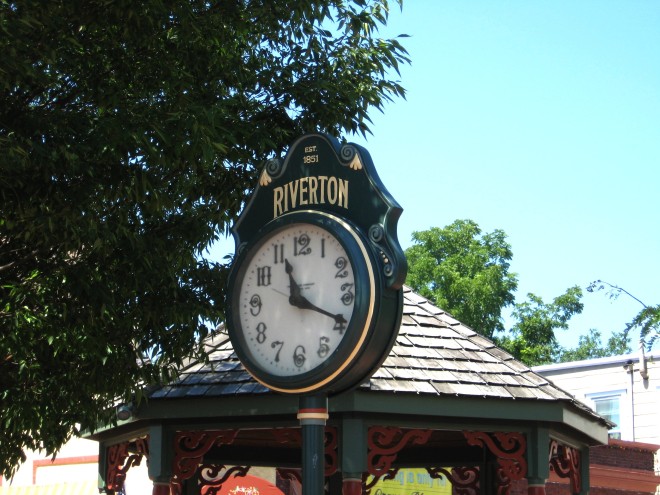 Return with me, NJWILDBEAUTY readers, to idyllic Riverton in our New Jersey, as that precious town prepared for our independence birthday this year. 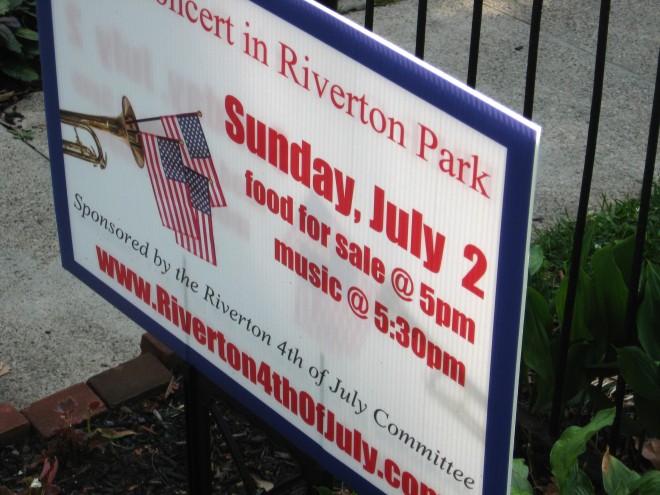 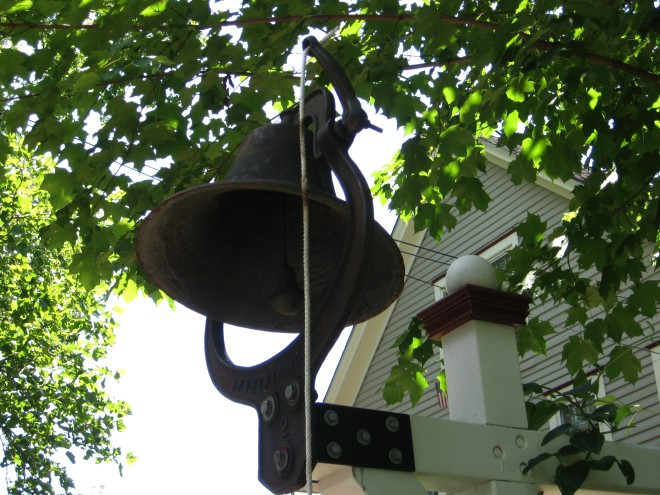 BELL (LIBERTY?) FOR THE CHILDREN TO RING 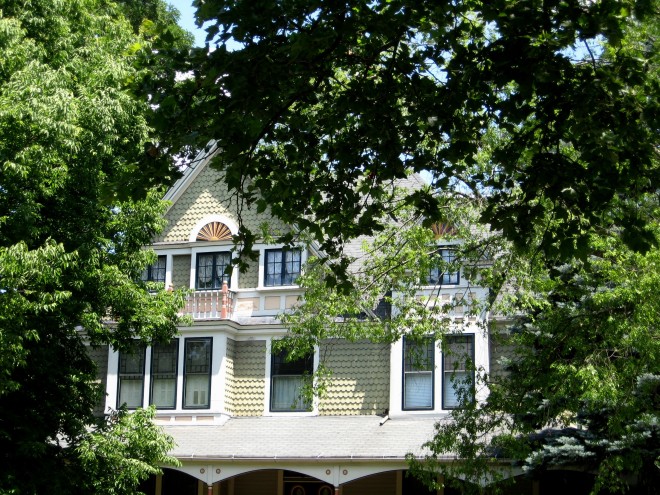 EVEN THE CHURCHES ARE STILL BEAUTIFUL 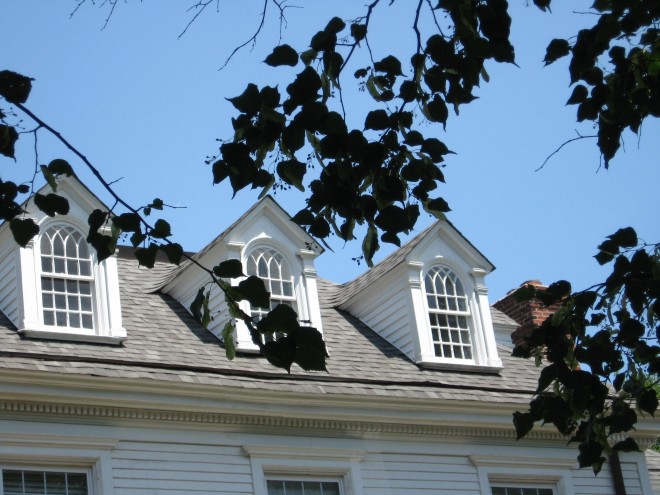 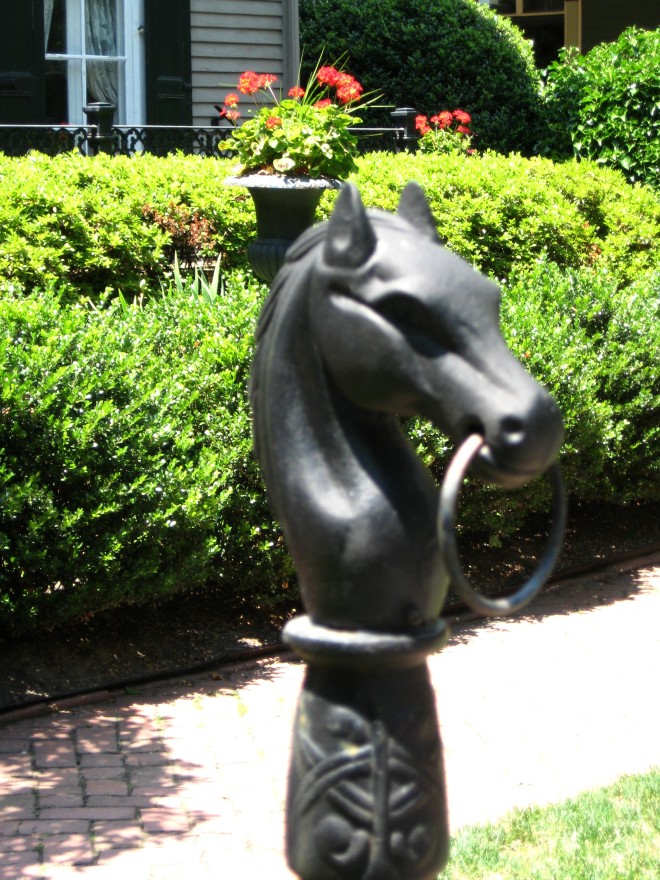 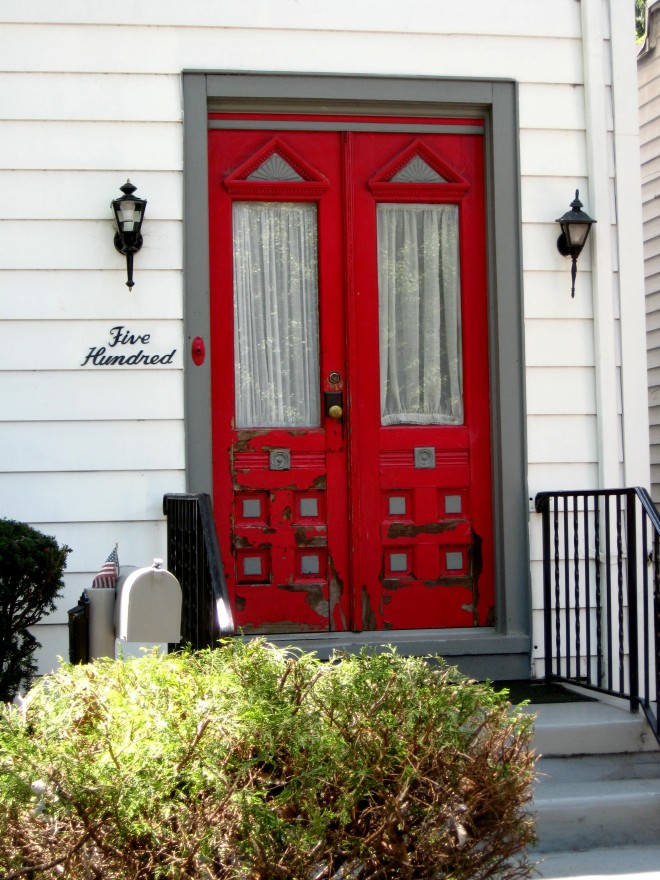 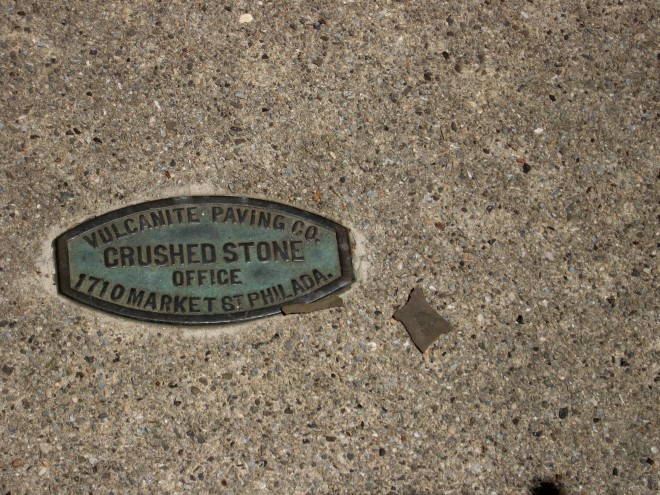 YESTERDAY BENEATH OUR VERY FEET 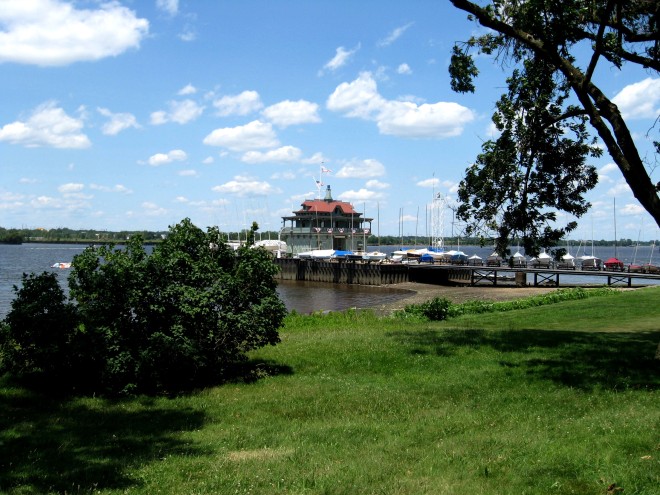 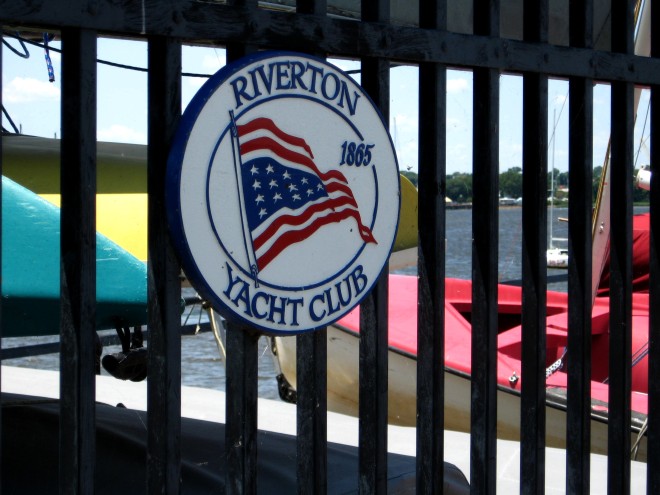 I feel most fortunate to live in New Jersey when I ride our brilliant light rail, The River Line, especially with people who’ve never been on it before.    We board this snazzy Swiss-built conveyance at bucolic Bordentown,   The station offers views of ‘my’ river, along with free, safe parking, and interesting sculptures having to do with our often undervalued state.

Within soundless seconds, we are wrapped in marsh landscapes, heading south through storied Roebling; brick-sidewalked Burlington (proud to have a London neighborhood founded in 1656), and on to explore and feast in idyllic Riverton.

The River Line could solve so many problems in our land, in our world.  Gliding along rails used for freight at night, the glistening two-headed train has become a traveling village.  Conviviality rules the ride, especially surprising New Yorkers, now key members of the Princeton Photography Club, on a day-long time-travel excursion. 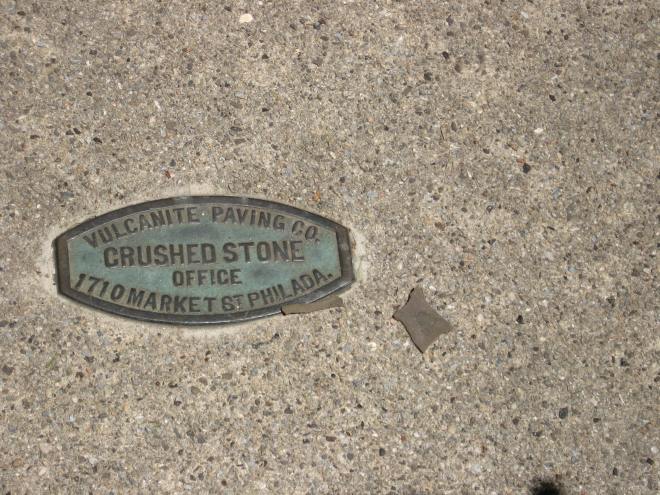 People walk around in Riverton.  They’re lively and open, eager to talk to strangers.  Parents hold children by the hand; and children hold books, coursing toward this town’s charming little library.  A Councilman asks us why we are photographing, tells us how Riverton came to be (summer homes for Philadelphians in 1800’s), and exchanges cards with the real photographers. 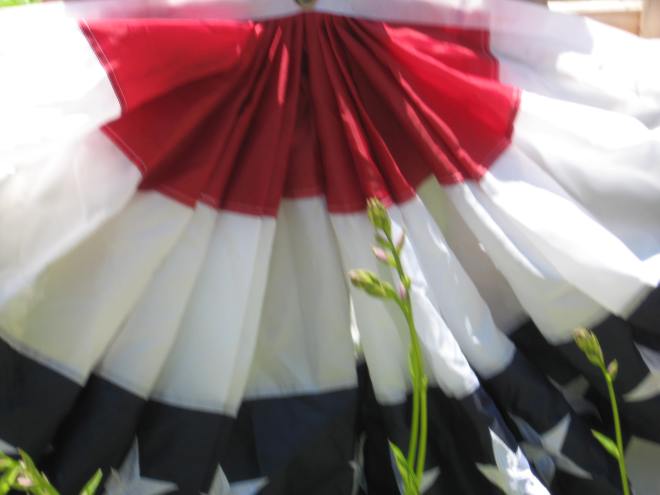 This amateur is in heaven in Riverton, because ‘her’ river, the Delaware, is so near, so alive, shimmering with history and promise.  The Delaware’s signature, –almost a perfume–, is that zingy breeze that starts to riffle hair, even on a steamy July day.

The town is gearing up for its hundred-year-old Fourth of July Parade.  Homes of other era are as spiffy as when they’d been built; each yard individually planted and tended and decorated for our first day of Independence.  One man invited us INTO his home to meet the cats.

Another neighbor explained that the arresting black and blue and white flag on one balcony honors policemen, EMT people, First Responders. 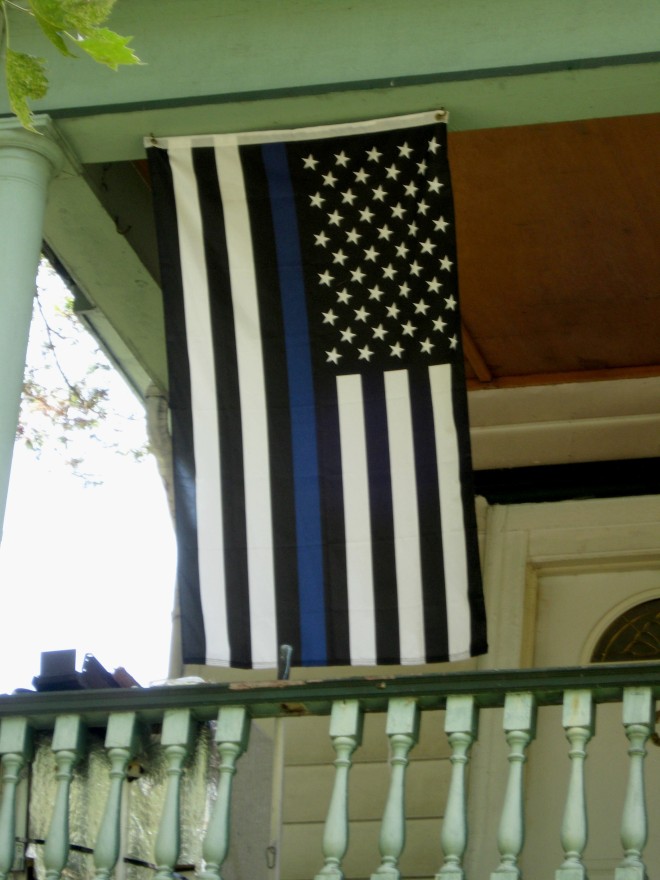 The colors of our day, however, were red, white and blue.  No town is more celebratory about the efforts of those founding fathers, –so near, across our pivotal river–, without whose vision and heroism, we would not have a country.